In the winter of 2015, brothers Dakota and Landon Tom had the idea of starting a small music group to play shows at some of the local music venues and bars in Zanesville, Ohio. What began as an acoustic duo, turned into a trio when their father, Mike Tom, joined their practices playing steel guitar. As the jam sessions in their living room became more frequent, they discussed adding a fourth member to the group to create a full band. Mike invited his friend, Harry Taylor, over for a couple of beers and asked Harry to bring his bass. After hours of jamming to classic country and rock songs, they knew that they all wanted to make music together. The biggest task was deciding on a band name. Considering that 75% of the band is family, they wanted a name that incorporated their close family ties. Since Mike was given the nickname "Maverick" by Dakota and Landon's mom, the band name was a no-brainer: SONS OF MAVERICK. Their music has an edgy rock feel with the sweet sound of a country steel guitar mixed with in-your-face bass, drums and guitar riffs. 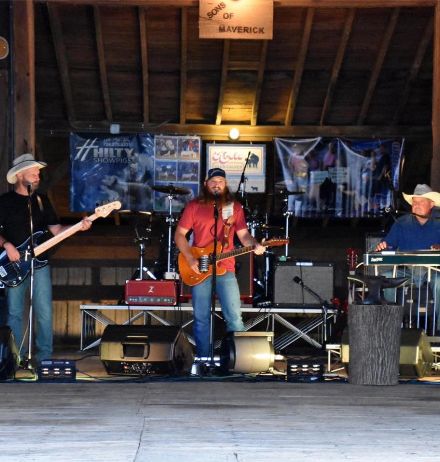