Veronica Lewis is one of the most exciting, emerging talents in the Blues &Roots world. A teenage prodigy, piano player, singer & prolific songwriter whois ”changing the game and upping the ante”, says American Blues Scene.With the release of her critically acclaimed, Chart-topping, debut album “You Ain’t Unlucky”, 18-year-old Veronica Lewis, is poised to bring new generations back under that big old revival tent that is Blues and Roots rock and roll. A mesmerizing live performer with serious piano chops, soaring vocals, and trailblazing original songs, Veronica gives her audience “every last drop, every single time”. “You Ain’t Unlucky” blasted Veronica Lewis’ career off to a mind-blowing start, debuting at Number #2 on the Billboard Blues charts, #1 on iTunes Blues chart, and landing the title Track ‘You Ain’t Unlucky’ as the Number #1 Blues Song of The Year 2021 (Root Music Report), and snagging two Blues Music Nominations in 2022 for Best Emerging Artist Album & Piano Player of the Year. Although Veronica only graduated high school in 2021, she is already an acknowledged seasoned professional, rocking the keys and electrifying audiences with rhythmically complex and challenging compositions and nuclear-charged live performances. Her band is a tight, straight-ahead trio of piano, drums, and sax that delivers a stunningly “full-on” sound. Veronica belts out a message made to heal the soul. Her strong, expressive voice is punctuated with a light and delicate vibrato, containing the pain and wisdom of the ages melded with the optimism she champions and commits to in her everyday life. Call It Roots, Call it The Blues, Call It What You Will - It’s 100% Veronica Lewis. Veronica, a prolific songwriter with Blues progressions as a launching point, writes original songs with stories that are both thought-provoking and emotional. Her inspiration comes from a mix of musical genres and eras, ranging from Katie Webster, Otis Spann, and Dr. John all the way to Freddie Mercury and Avril Lavigne. Veronica fuses these crucial elements together with the true language of the Blues, and the energy of early rock and rollers, like Little Richard and Jerry Lee Lewis to create a truly individual style that is completely Veronica Lewis. 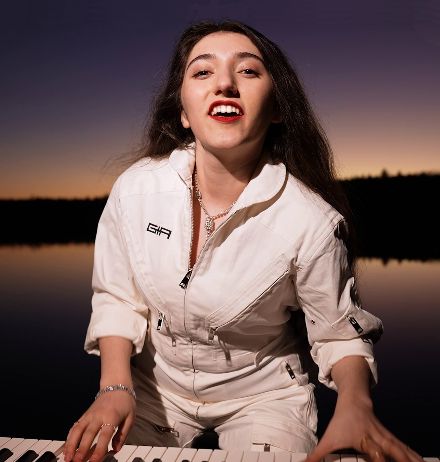